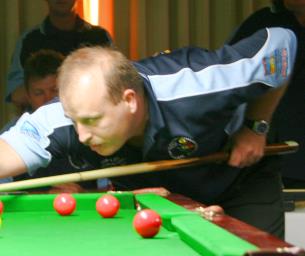 Hardest player to beat,   Anyone with a cue.
Love playing pool for fun and the great people you meet.
–

–
Big Guns Comment:
A former Tassie star that now lives on the NSW north coast who has little fear of the big names. He has played them all a thousand times at national titles and other tournaments. Damo can handle himself quite well on the pool table, although, the best of 21 may be a big test his long range fuel tank when he is deep into a big match.
Last years NSW team captain will be tough to beat if not treated with respect. I can’t believe I let him in for $250! The bookies have him placed at $41.00 to win the title.
Damien Smith NSW