Congratulations to Ben Nunan who produced a super-human effort to win the inaugural ‘Big Guns’ tournament.
Ben was forced to come from the losers side after he was eliminated by Joel Younger in the semi final of the winners side.
Ben then went on to defeat Victoria’s Jake McCartney, Queenslander Adam List and then got his revenge against Gold Coast local Joel Younger…. and don’t forget, all these games happened on the Sunday!!!
Then, he had to go into the Grand Final and take on the Red Hot West Australian, Ron Kelly who had played excellent pool all weekend.
Because Ban came from the losers side, that meant he had to defeat Ronny twice (over 21 frames).
For those in attendance, they were treated to some of the best pool played by anybody, anywhere. Benny Nunan dismantled Ronny in the first final, hardly missing a shot and giving Ronny very little, if any opportunity… but the best was yet to come.
The final match of the tournament was going te be the best, Ronny gathered his thoughts and regained his composure and came back at Benny in the second best of 21. Both players were fighting very hard to capture the $10,000 first prize. After almost 40 hours of pool and hundreds and hundreds of frames over the weekend, it came down to the final frame of the tournament to determine the champion. At 10-10, Benny walked to the table, smashed open the balls, and that was it… good night nurse… Benny cleared the table and was declared the champion.
Well done to Ron Kelly, who played some of the best pool of his career this weekend, and he believes he still is not quite back to his best, so look out for next time.
This grand final has been rated one of the best of all time. We are privileged that the whole grand final has been captured by William from Ballstream.com and can’t wait till the DVD is ready so we can watch it all again.

END_OF_DOCUMENT_TOKEN_TO_BE_REPLACED 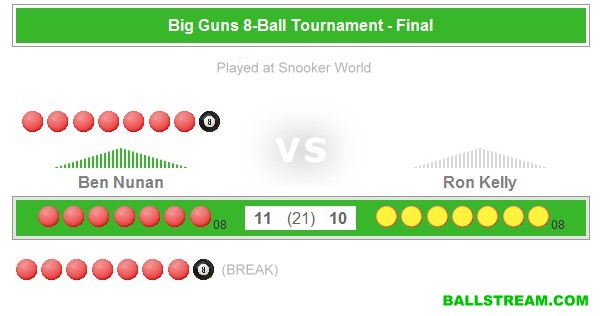